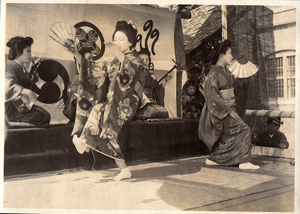 The folding fan was invented as a form of traditional handiwork during the 8th century, in the city of Kyoto in Japan. The fan has been cherished for more than 1200 years in Japan as an object that is believed to bring good luck. Rather than being an object used to cool one down when the weather was warm, the fan was in fact originally utilized as a memo pad around the time that it was first invented. Paper was a valuable and expensive material that many people could not easily afford; therefore, people wrote their feelings and emotions in the form of “Tanka poetry” on the fan itself. The folding fan was used during the Heian period (in the 8th century) as an accessory and for play by aristocrats and the wealthy, and also as an object vital to a traditional ceremony in which one became a Buddhist priest. During the Heian period, the common citizen was in fact prohibited from the use of the folding fan. It was during the Kamakura period that the folding fan came to be widely used by both the wealthy and the common citizen, in ways including as a prop in traditional “Nou” theatre, and also during traditional tea ceremonies. The trend of the Japanese folding fan was taken overseas to Europe during the Edo period, and came to be treasured by women of the upper class as an exotic article of emotional expression. It is said for there to have been more than 100 shops selling folding fans in Paris at one point in the 17th century; the fan became popular as a fashion item among the European upper class, and there is still nearly no summer in which the folding fan is not loved as a representation of traditional Japanese handiwork.

Ways to Use the Folding Fan in Japan

Item of get good luck toward you

A folding fan is an indispensable way of protecting yourself from disasters. A folding fan can help get good luck towards you in Japan. For example, presidents of companies or people of wealth often hold it for good luck.  Even brides hold it for happiness at their weddings for good luck and a reminder of the history of Japan.

At a traditional tea ceremony in Japan, a sign of reverence one can give to their partner is for a folding fan to be put in between two people before a bow or salute. It is also common for students who are learning the traditional craft of tea-making to pay their fees to the teacher or expert by handing them an opened fan with the fee placed on top.

For focus and concentration

The opening and closing of a folding fan is often executed during a match of “Shougi”, a form of Japanese chess, for the fan is believed to influence one’s ability to concentrate and think during a game. With this belief of the fan bringing focus and control of one’s spirit, it is also commonly seen to this day for Japanese business men to bring a folding fan with them to business meetings.

The folding fan is intended to bring good luck, and is therefore often given as a gift to bring luck and thoughts of success to one’s business endeavours, and also to give wishes of health and growth to one’s children and family.

The Folding Fan as a Tool of Expressing Love

The folding fan has been used since the Heian period as an object through which love is expressed, used in ways such as writing down onto a fan one’s feelings towards a partner they love, similar in form to a love letter. A famous Japanese book, called Genji Monogatari, throughly expresses the relationship between love and the folding fan. The book depicts how, one day, the male protagonist Hikarugenji, a nobleman, lays his eyes on a beautiful, small flower and decides to take it into his possession. He commands for his servant to pick the flower for him from the garden of the house it is growing in front of. When obeying his orders to attain the flower, a woman suddenly appears from that house, picks the flower herself, places it on her folding fan and hands it to the servant. The nobleman receives the fan to find her emotions and feelings for him written of the fan itself, with the lovely smell of the flower exuding from it. This love letter, in the end, causes for the nobleman to fall in love with the woman who had her folding fan given to him. The 1st of May became constituted as the “Day of Love” in Japan in the year 1990. This is the day on which one can take the opportunity to exchange folding fans with their partner or mail letters to their loved ones. The folding fan was also widely used to express feelings of love in Europe. It was common for sophisticated, upper-class women to use a “fan language” through which they expressed their emotions and thoughts by creating movements with of the folding fan, without having to use words. For example, when upper-class men and women attended balls or gatherings, women were often able to catch the eyes of those they were pursuing through the language of the fan, and conveyed their feelings through this “fan language”.